The Day I became MOM 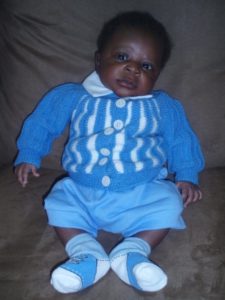 I can’t remember the first time I consciously thought about being a mom. Like so many other things in life, it just seemed like the next step in a long line of things to file under, “the way my life should go”. About 5 months into the process of trying to conceive, it was evident that this was not, in fact, the way my life was going to go.  Thankfully, adoption was always on the table for us. As an adoptee myself, I knew it was something I would love to experience from the other side one day. That day, had just come a lot sooner than I thought!
We jumped (leaped…stumbled?!) into the process.  Day after day, document after document, we were “filing” to be parents. Replacing a sperm and an egg, with notarized documents and a social worker.  We were officially paper pregnant, and gaining baby weight in the process. My already active imagination was totally hay wire during this time. I would imagine every different scenario that could possibly happen since we had no idea where we would even be heading to meet our child. I imagined snow storm babies, babies on the beach, babies in the mountains…I imagined crying as I held that beautiful bundle of joy and being just totally overwhelmed at becoming a mother for the first time.But rarely does your imagination match reality. Things happened in a crazy whirlwind for us. We ended up being matched really fast. So when our son’s biological mamma asked us to be in labor and delivery with her, we nervously said yes. We waited to get the call, equal parts eager and terrified to be at the birth of our son…at the bedside of a stranger. We got on a plane early to make sure we were ready when the call came. And we waited, and waited and waited…over a week in a strange city…just waiting for the phone to ring. Every time it rang we would jump, but every time, it was just a nervous friend or family asking,” HAS IT HAPPENED YET?!?”I will never forget the night that it finally did. We had just gone to bed and I was awakened by the familiar sound. I almost let it go to voicemail in my half-asleep state, but I picked it up and heard our social worker exclaiming, “She is in labor! Get to the hospital as fast as you can…” We RACED to the hospital, so we didn’t miss a thing.I cannot explain to you what it is like to sit in the room with a stranger in labor wondering if this is actually your son she is painfully delivering. My husband literally hid in the corner staring at the floor because…well…it’s kind of awkward.  We watched hours of a French Prince of Bell Air episodes until she was finally ready to push (Side note: Our son was born during an epic fight between Carlton and the Fresh Prince at a school dance.) When Luke busted into the world there was a moment of confusion when the nurses tried to let me cut the umbilical cord. I was frozen, with no social worker, or specialist accompanying us I couldn’t help thinking,” What is the freaking protocol for this?!” I didn’t cry like I had imagined it was just such a whirlwind. In my intense effort to be empathetic, I couldn’t help but do anything but care for the woman that had just screamed Luke into the world. All my focus was on her and making sure she was okay with us still being there. After all, Luke was her son too. She was as gracious and kind as someone can be in these circumstances.  But it was gutting and weird and like I said…awkward. She was just 19 and we were in our twenties and had never been parents. We certainly never imagined ourselves in this situation. We held Luke, and talked to her, and tried to make sense of what was going on. It was both beautiful and terrible in all of its complexities. I didn’t feel like a mom, for all the imagining in my head, this felt nothing like the beautiful scene I thought would play out. It felt messy and scary and completely out of our control. About a day later, Luke was officially placed in our care. We got ready to check out of the hospital and were exhausted and excited. We went in to do some hospital paperwork and sat at the desk of a hospital billing administrator. She asked us the standard questions, “What is your social?”” Babies full  name…” etc. So when she got to the question, mother’s date of birth…I hesitated, thinking to myself, “Why didn’t we ask her date of birth after she was in labor?! Am I going to have to call the agency and find out her birth date!?” So I just said, “I am so sorry, I don’t know mother’s birth date.” The administrator looked up from her paperwork and looked me straight in the eye and said, “ Honey, I am not talking about her, I am talking about you. You are his mother.” 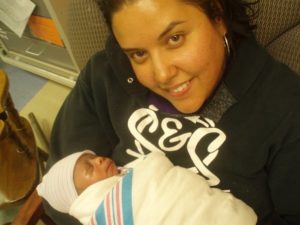 And in that phrase, I crumbled. All the sobs and the feeling on “becoming” a mother hit me…hard. I sobbed and sobbed, literally so loud people looked up from what they were doing. After all the trials of the last few months, the paperwork, fundraising, traveling and imagining…I realized I had somehow become a mother, and Luke would forever be my son. I literally had to leave the room and have my husband finish the paperwork. I held my son in my arms and wept, sad and happy tears mingled together. Adoption is funny that way, especially when you are becoming a parent for the first time. There is something so profoundly sad, but also so profoundly hopeful.  In retrospect, I am overwhelmed by our capacity to love. Adoption forces your heart to expand to accept not just a child, but a new family, new culture and in a lot of ways, a new identity. When Luke was born, I became a new person. That person is a mom, but also a warrior, and a believer in miracles. The day I “became” a mom was unconventional and anything but the “fairy tale” I was promised. But it a lot of ways, it was so much better.
The Day I became MOM