Our Perfect Set of Twins

I wanted to be the mother of twins for as long as I can remember.  When I was a little girl, I always played house with my older sister and I was the proud mother to boy and girl twins for many, many days of my childhood.  When I grew up, got married, and became pregnant for the first time, I could not wait for my first ultrasound when it would be revealed that I was having twins.  I was surprised when the ultrasound technician only found one baby (it certainly did not help that everyone kept asking if I was having twins, I am only 5’2” people, there is not much space for a baby to go!).  We were excited to find out that we were having a baby boy and I figured God knew I needed practice with one before He gave me twins the next time.  After the delivery of my son, I swore we were never having any more biological children. But, when Brady was 13 months old, we found out we were pregnant again.  This time, I knew it would be my twins.  At the ultrasound, we found out once again that there was only one baby.  This time a sweet baby girl, Ella.  As happy as I was that we would have a boy and a girl, I was still confused because I thought FOR SURE that God had been preparing me my whole life to be the mother of twins.

When Ella was almost two, we found out that we were pregnant again.   Yes, we know how that happens (why do people always ask that?)  Now, I knew without a doubt, that this was going to be my twins.  This was going to be the big day.  At our ultrasound we found out that we were having another girl.  This time our Kinsley.  While I was thrilled to have another healthy baby girl on the way, I could not believe how wrong I had been about God giving me twins.  Little did I know, this was the time I would have twins.

Nineteen weeks after that ultrasound, I was in the hospital in the operating room having my third c-section to deliver my baby.  What I did not know, is that halfway around the world, a little baby boy, ten days old at the time, was also in a hospital recovering from surgery. 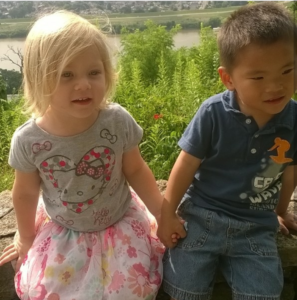 Our Bennett was born in China on December 19, 2012.  He was born with a life threatening condition that required immediate surgery.  He was given that surgery and then he went to live in an orphanage before entering foster care.  I did not even know he existed until July 14, 2012.  That was the day that I felt the tug on my heart to google “special needs China” and of the thousands of faces on the website, my heart stopped when I saw Bennett.  I clicked on his picture and saw his birthday and immediately, felt what I knew to be true, God had twins for me, just not the way I had always imagined.  I would have my boy and girl twins. My girl would just have the blondest hair and crystal blue eyes and my son would have silky brown hair and eyes the color of Hershey kisses.

Many people discourage “artificial twinning” and we actually had to get a waiver from our agency to allow us to adopt Bennett because they typically did not allow it.  There are certainly some challenges.  When we brought Bennett home, he and Kinsley were both a few weeks shy of turning 3.  Kinsley had to learn to adjust to not only a new child in the house, but a new child that was her age.  We send our kids to the same preschool, so there can be some natural challenges with sibling rivalry in the classroom when one child receives an award and another child does not.  However, the benefits have far outweighed the difficulties for us.

Kinsley and Bennett really did develop their own “twin” language when Bennett first came home and did not know English. She would tell us what he was trying to say.  They have confidence going into any room (whether church, school, playing) because they have each other.

I credit Kinsley with how well Bennett adjusted to being at home because she took on the role of being his best friend as soon as she realized that her place in the family was secure.  I love, love, love that this was the way that God chose to give us our twins.  We prayed for a twin bonding to occur in their hearts and I can say without a doubt, that God answered that prayer and they feel a twin connection, just like biological twins.  We could not have asked for a more perfect set of twins.

Our Perfect Set of Twins